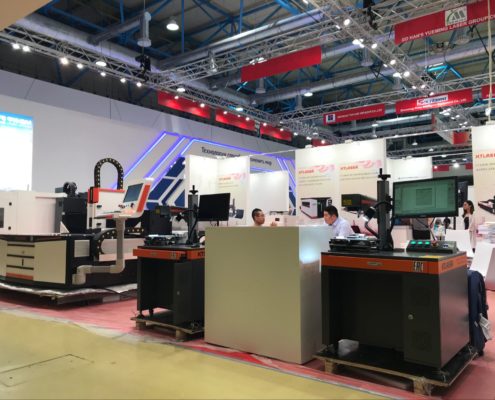 During the laser gasification cutting process, the surface temperature of the material rises to the boiling point temperature is so fast. That it avoids melting by heat conduction. So that part of the material vaporizes into vapor and some of the material is from the bottom of the slit to gas. Flow blows away. In this case, need a high laser power.

In order to prevent the material vapor from condensing on the wall.The thickness of the material must not greatly exceed the diameter of the laser beam.This processing is actually only in the small area of ​​use of iron-based alloys.

This process cannot for materials such as wood and certain ceramics that are therefore less likely to recondense the material vapors. In addition, these materials usually have to reach thicker cuts. In laser gasification cutting, optimal beam focusing depends on the material thickness and beam quality.

In laser melting and cutting, the work piece is partially melted and the melted material is the air flow. Because the transfer of material occurs only in its liquid state, the process is laser melting cutting.

The laser beam with a high purity inert cutting gas to force the molten material away from the kerf.And the gas itself is not in the cutting. Laser melting cutting can achieve higher cutting speeds than gasification cutting. The energy for gasification is usually higher than the energy to melt the material. In laser melting and cutting, the laser beam is only partially absorb.

An inert gas is generally for melt cutting. If oxygen or other reactive gas is instead, the material is under the irradiation of a laser beam. And a fierce chemical reaction with oxygen generates another heat source to further heat the material, which is oxidative melt cutting.
Due to this effect, for the same thickness of structural steel, the cutting rate that is higher than that of melting cutting. On the other hand, this method may have worse cut quality than melt cutting.

In fact it produces a wider kerf, a noticeable roughness, an increasing heat-affecting zone and a worse edge quality. Laser flame cutting is not good when machining precision models and sharp corners (risk of burning sharp corners). Pulse mode lasers can be to limit thermal effects, and the power of the laser determines the cutting speed. In the case of a certain laser power, the limiting factor is the supply of oxygen and the thermal conductivity of the material.

If you are finding a fiber laser cutting machine,just contact us.

Glad to provide you the suitable solution.

Welcome to laser machine exhibition for long cooperation with XT LASER in 14-18, May in Moscow—Max