Now fiber laser cleaning machine gain more and more popular, here is some introduction of it for your reference, please kindly check Introduction of Fiber Laser Cleaning Machine as follow: 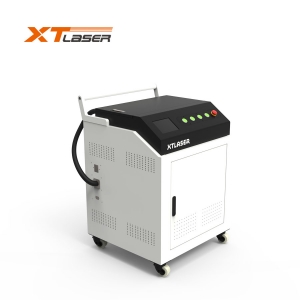 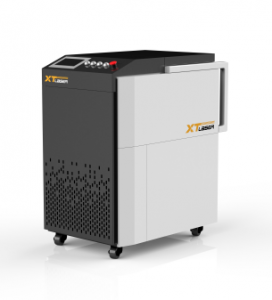 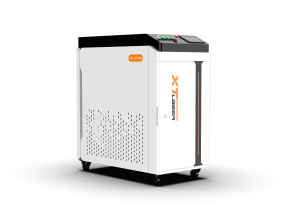 And with simple operation, switching power supply, open the device, then it can be achieved cleaning without chemical reagent, medium and water washing.

It has many advantages of the focus adjustment manually, joint surface cleaning, higher cleaning surface cleanliness.

And it also can remove the surface of resin, grease, stains, dirt, rust, coating, coating, paint on objectives.

Features of cleaning head as follows:

1. First:Small size, light weight, convenient and flexible to use.
2. Second:The front support frame can achieve precise cleaning, and the entire cleaning work complete on the focal plane.
3.Three: The operation is simple, and just power on, and it can hand-held or matched with a manipulator to realize automatic cleaning.
4.Forth: The line width of the laser cleaning light and the swing speed of the galvanometer can  adjusted by holding the button on the gun head.
5.Otherwise:The laser cleaning gun head consists aluminum profile, with high anti-vibration stability.
6. At last:The cleaning head 100w can be used to choose 100w and 200w. But 200w can’t use 100w

Some notes about machine using:

It is better to send us  your products sample pictures, then we can help you to make sure the machine can do your work or not.

And if you  have time,you can tell us how many pieces you want to clean,we need to confirm the power.

Any questions,we can have a further discussion. XTLASER will provide you with the best solution~

How to choose a suitable fiber laser cleaning machine.

Many clients ask us that how to choose a suitable fiber laser cleaning machine.Hope it will help you.

This is Ariel from XTLASER,responsible for European market.And I have worked in laser
industry 3 years and served more than 200 customers for different requirements
of laser equipments.Including laser cutting, marking,cleaning and welding machine.Many

clients ask us that how to choose a suitable fiber laser cleaning machine.Hope it will help you.

Firstly,Thanks for your attention to our fiber laser cleaning machine on our website.Fiber
laser cleaning technology is new technology in these two years.XT LASER cleaning
system is the new generation product with a high technology that applies for the
purpose of the material surface cleaning application, which is easily to be set up,
operated and automated. Also it has no damage to the base of the material due to the
no-touch surface.What’s more, No need of chemistry, water or other working medias, the equipment
can be also applied for removing the resin, grease, stains, dirt, rust material, coating, coating and paint.

Pls tell us your detailed cleaning demands so we can send you a detailed quotation list for your reference.

It need about 10-15 working days after receiving the deposit.

By T/T in advance, 50% as deposit, the balance paid before the shipment.If you worry
about that, we can also apply for 30% deposit for you.

And any other questions,pls let me know.Wish for your kindly reply.
Contac us: Ariel

Hope it can help you learn more about the machine.

Fiber laser cleaning technology is new technology in these two years.It applies for the
purpose of the material surface cleaning application, which is easily to be set up,
operated and automated.It has no damage to the base of the material due to the
no-touch surface. No need of chemistry, water or other working medias, the equipment
can be also applied for removing the resin, grease, stains, dirt, rust material, coating, coating and paint. 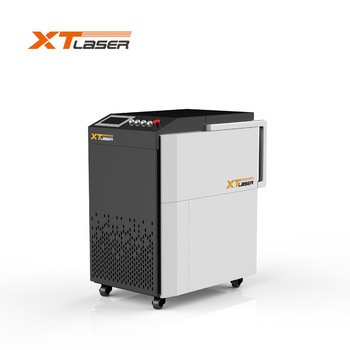 Delivery time
It need about 15 working days after receiving the deposit.

Payment conditions
By T/T in advance, 50% as deposit, the balance paid before the shipment.If you worry
about that, we can also apply for 30% deposit for you.

At present, there are many cleaning methods in the cleaning industry. Include mechanical cleaning, chemical cleaning and ultrasonic cleaning. However, their applications are greatly limit under the constraints of environmental protection and the requirements of the high-precision market. Because the fiber laser cleaning machine has obvious advantages in various industries.

The laser cleaning machine can be integrated with CNC machine tools or robots. Therefore we can implement remote control and cleaning.  It can realize the automation of equipment, form a product assembly line operation, and intelligent operation.

The use of optical fiber to transmit and guide the laser to make it flexible. Then the built-in scanning galvanometer to control the high-speed movement of the light spot. Therefore, it is convenient for non-contacting of irregular parts, holes, grooves and other parts that are difficult to reach by traditional cleaning methods Ground laser cleaning treatment.

Short-term impact will not heat the metal surface and cause no damage to the substrate.

The pulse laser used in the laser cleaning machine has a long service life, usually up to 100,000 hours. What’s more, it comes with high stability and good reliability.

Firstly, there’s no chemical cleaning agents required; Secondly, no generation of cleaning waste liquid; Thirdly, the pollutant particles and gas during the laser cleaning process can be collected and purified by the portable exhaust fan to avoid environmental pollution.

There is no consumables during the use of the laser cleaning machine. And the operating cost is low. Only the lenses need to be cleaned or replaced regularly in the later period. Therefore, the maintenance cost is low and close to maintenance-free.

For more information please feel free to contact us.

Laser cleaning technology is widely using in weapon maintenance. The laser cleaning system can efficiently and quickly remove rust and contaminants. And can select the removal site to realize the automation of cleaning. Using laser cleaning, not only the cleanliness is higher than the chemical cleaning process. But also almost no damage to the surface of the object. The laser-remove waste material basically does not constitute pollution to the environment. And it can also operate at a long distance, effectively reducing the health damage to the operator.  Laser cleaning machine different industries.

Removal of old paint on airplanes

In Europe, laser cleaning systems have long use in the aviation industry. The surface of the aircraft must repainte after a certain period of time. But the original old paint needs to be completely remove before painting. The traditional mechanical paint removal method is easy to damage the metal surface of the aircraft and bring hidden dangers to safe flight. If multiple laser cleaning systems are using, the paint layer on the surface of an A320 Airbus can be completely remove within 3 days without damaging the metal surface.  laser cleaning machine different industries

Cleaning of external walls of buildings

With the rapid development of my country’s economy. More and more skyscrapers are being built. And the problem of cleaning the outer walls of the building is increasingly prominent. The laser can effectively clean various pollutants on various stones, metals, and glass, and the efficiency is many times higher than conventional cleaning. It can also remove black spots and color spots on various stones in buildings

Cleaning in the electronics industry

The electronics industry uses lasers to remove oxides: the electronics industry requires high-precision decontamination. And laser de-oxidation is particularly suitable. Before soldering the circuit board, the component pins must be thoroughly deoxidized to ensure the best electrical contact, and the pins must not be damaged during the decontamination process. Laser cleaning can meet the requirements of use, and the efficiency is very high, only need to irradiate laser for one stitch.

The laser irradiation of the surface of the object to clean can produce at least three effects. Laser cleaning machine principle and superiority as follows:

Photolysis or phase change of molecules

The surface to clean is irradiat with a high-frequency pulsed laser, and the laser beam can generate ultrasonic vibration on the solid surface to generate mechanical resonance to vibrate the dirt layer or condensate.

No need to use any chemicals and cleaning fluids. The clean waste is basically solid powder, small in size, easy to store, recyclable, non-photochemical reaction, no pollution.
Good effect

The laser can transmitte through the optical fiber, cooperate with the robot to achieve long-distance operation, and can clean the complex structural parts that are difficult to reach by traditional methods. This feature also makes the safety of the operator in some dangerous places more secure.
Widely used

The initial investment of the laser cleaning system is high, but it can use stably for a long time, and the service life is up to 10 years. The operating cost is low, the speed is fast, the efficiency is high, the time is save, and the return on investment can be quickly obtain. In the long run, the cost ratio Traditional cleaning methods are lower.

Fourthly,Simple operation, the power can be charged, and the automatic cleaning can be realized by hand or with the manipulator.

Some notes about machine using:

It is better to send us  your products sample pictures,then we can help you to make sure the machine can do your work or not.

And if you  have time,you can tell us how many pieces you want to clean,we need to confirm the power.

Any questions,we can have a further discussion.

Here we will learn Laser Cleaning Machine for Rust Removal, see the following

For the high-cost Good cleaning effect, such as Limited size, Complex effluent treatment, and Dry workpiece.

and Long-focus cleaning laser source has high surface roughness and high tolerance range of processing height on the workpiece,

Also the use of special mode laser, the high tolerance range of non-stable environment, and efficient removal of rust stains with no hurt to the base material.

Laser cleaning fully enclosed external optical path system, combined with a special mode of laser, the high-energy pulse laser collected in the surface of an object,

But for the principles of plasma blasting and by controlling the effective displacement of the laser beam to achieve cleaning.

The whole process is controlled by the computer according to the program. Laser Cleaning Machine for Rust Removal

the prior art selection of 1064 nm solid-state lasers or fiber lasers, metal absorption rate of up to 30%, with special mode spot, both can effectively clean rusty,

and also protect Base metal with no damage. 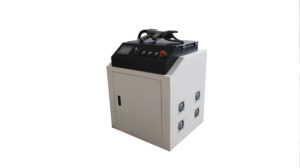