Compared with the traditional welding, like tig, it doesn’t need to use welding wire.Only when the gap more than 0.5mm, we should use the wire feeder.

The quickly-wear parts for the  machine are only protective lens and copper nozzle.

The gas can isolate the air from the welding plate to prevent the reaction with the air. So the welding surface of the metal plate will be white and beautiful. The gas also can protect the lens from welding dust.

Last but not least,easy to maintenance.

The machine is very easy to matain.When finish your welding work, turn off the power and clean the welding head, it can make the lifetime of protective lens and copper nozzle longer.

That is all my descriptation.Hope it is helpful for you. If you have any confused of machine,please feel free contact us.

Fiber laser welding uses a high energy density laser beam as a heat source for efficient precision welding. However, laser welding requires high precision for workpiece pre-machining. So the position of the beam on the workpiece cannot not deviate significantly. If the assembly accuracy or beam positioning accuracy of the workpiece does not meet the requirements, it is easy to cause welding defects. This limits the process capability of laser welding to a certain extent. Because the spot size is small and the weld is narrow after laser focusing.
In response to the limitations of the above laser welding technology, the market has gradually introduced a laser welding method with double wedge laser vibration.  There’s a special wobble vibration module on the welding head. The application of wobble welding technology can make laser welding more widely used. And it can achieve high-efficiency laser precision welding for larger or wider welds workpieces. 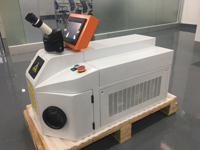 Jewelry laser welding machine has the characteristics of high welding strength and speed, low scrap rate. and widely used in jewelry manufacturing. It has the following advantages over traditional welding technology, such as

For jewellery companies, the business volume is large. After selecting a good quality jewellery laser welding machine, it not only improve the work efficiency greatly, but also improve the welding efficiency obviously, the welding time of a single workpiece is greatly shortened, and the welding process is accelerated for the customer. Speeding up the return on investment is beneficial to indirectly improving the profitability of jewelry companies.

From the perspective of the internal and external structure of the easy-to-use jewelry laser welding machine, it adopts an integrated molding structure. The overall size is small and compact. The laser has a long service life and can work continuously for 24 hours. It’s free maintance , greatly reduce the maintenance cost, the maintenance frequency is relatively low. It only takes more than three months to maintain it for non-high frequency use.

Its high quality will cause longer service life. And jewelry laser welding machine is also applicable for welding gold, silver, stainless steel and other metals and their alloys. Used for welding holes in gold and silver jewelry, spot welding blisters, repairing seams, and welding parts of claws

Jewelry laser welding machine has high welding quality, and the weld seam is very beautiful. The weld seam can be intensified with wood, no need for secondary processing. And can effectively improve the qualified rate of the product. Therefore, superior material plus advanced mold technology, good airtightness. This makes the jewelry laser welding machine stand out in the field.

If any more, please feel free to contact us

Nowadays gears are widely used in automotive manufacturing, medical equipment, machinery manufacturing, aerospace and other fields. And the welding process of the gear directly affects the performance of the product. The traditional welding process has the disadvantages of high heat input and easy deformation. So it cannot meet the high precision requirements of the gear. For now both vacuum electron beam welding and laser welding can meet the requirements of gear welding process. However, vacuum electron beam welding requires a vacuum environment. and it is with  low efficiency, expensive equipment. Therefore it is not suitable for industrial production. Therefore, laser welding is more suitable for gear welding and laser welding technology has become an important condition for gear welding applications.
After the high energy density spot of the fiber laser acts on the surface of the material, we can obtain a large aspect ratio (ratio of weld penetration to melt width). Through proper process adjustment, the amount of deformation of the gear after welding is small and no need subsequent processing. The laser welding assembly clearance requirement is one of the main reasons for limiting its application. And the gear assembly is an interference fit. So the clearance fit requirement during the welding process is basically negligible. 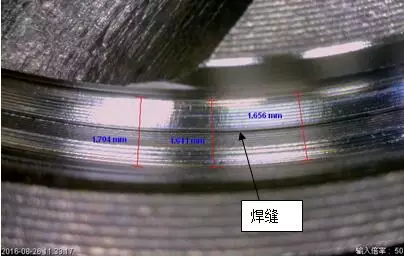 The fiber laser is for the welding test and the gears were pre-welded. And different welding speeds can receive the different weld penetration and melt width. It can be seen from the figure that the weld seam is obviously “nail shape”. Meanwhile there is no obvious welding heat affected zone. And the weld seam has no defects such as pores and cracks. Fiber laser welding can meet most gear welding process requirements. 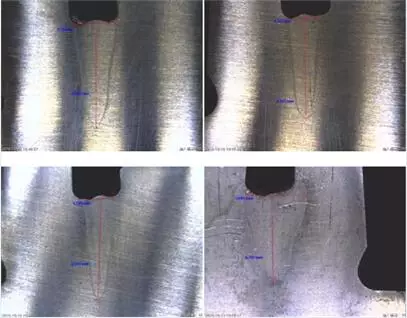 Fiber laser welding has the characteristics of fast welding speed, small deformation after welding and no post-weld treatment. Now it is very popular in various industries of the national economy. China fiber laser is now specializing in fiber laser research and development and production. What’s more, provides customers with a wide range of application process technology support. So to provide customers with high-quality fiber lasers is the driving force behind the continuous efforts and progress of the company.

If you have any more information，feel free to contact me:

We have came back from China New Year Holiday. Welcome all your visit and inquiry of laser machines.

We know all fiber laser marking machine have one inner red light pointer. Before marking, we can check the detail working position through it. When we click “Red” button, we can see the red box on working table. This red box is the precision marking position.It have a big help for our marking job.

At the beginning usually we only use fiber laser marking machine on metal material and some painted material. So this red light pointer is enough for our work. But now people use laser machine on more and more material. Some material will absorb the red light or have similar color with red light. In this case it is a big problem for operator to see the correct marking position.

So some company develop new system to instead the red pointer. Camera Laser Marking System rise in this situation.

Camera Laser Marking System need use special galvo head. Compared with ordinary galvo head, CCD scanning head have a camera in the front of F-theta lens. With this galvo head, we can see the working area in software. After we input the marking context, we can see the marking position through monitor. Even the material is red or can absorb the red light, it have no influence for camera.

Compared with ordinary fiber laser marking system, this system is expensive. But it is very useful for some special application.

Although this is new technology and have many flaw, we are updating it continue and make it become more and more simple on operation and adjust. We believe it will instead red pointer very soon in the near future.

Compared with camera system for laser marker, it have use longer time. CCD camera can instead microscope. When machine working, we can see the welding processing and position on monitor directly, it is very convenient for operation.

If you want to know more details about this machine, you can contact me by below:

According to the EC guidelines. XT laser welding unit is a piece of working equipment. Then specifically designed for use in the dental laboratory Unit identification Product. Laser welding unit (Nd: YAG laser wave length 1064 nm). Type: XT-GY1-150. And XT-GY1-200. China the parts to be welded are manually arranged. Then positioned and laser welded in the welding chamber using the stereo microscope. The required inert gas and the laser pulse are switched on. Also or activated via a two stage pedal switch. During and after the processing. The welding vapors is automatically extracted.

The unit must be installed. And put into operation by authorized. Then qualified personnel or XT service technicians. Before switching on the unit. Then you must have read and understood the user’s instructions! Switch on the device only after having done this! Before using the unit for the first time. The relevant authorities must be informed

If yo have any doubts, just let us know.

From the market growth, according to the type of laser, the next five years, the market is the fastest growing direct semiconductor laser is mainly of high power semiconductor laser kilowatt level; the second fastest growing is the quantum cascade lasers, the lasers have obvious advantages, is widely used, especially play an important role in counter-terrorism, security and other applications in the future, the world of quantum cascade lasers will have a huge demand. Fiber lasers will maintain a steady growth rate.

From the application of laser market, occupy about half of the country to remove the optical communication market, the macro material processing is the largest market, followed by the micro processing, with the future of manufacturing industry continued to develop high-end, micro processing market will have great development space.

Although insiders predict metal welding Market in the future is expected to exceed the cutting market, but in the next five years, from the sales point of view, the fastest growing or metal cutting applications, is expected to 2022, in the metal cutting applications will reap $700 million KW fiber laser. At present, with the development of fiber laser, laser cutting machine has made a standard product.

Take a look at the global laser marking market. This is a relatively mature and stable market, the total income is about 600 million U.S. dollars, the future market growth is also relatively slow. At present, the laser used for marking is mainly fiber lasers (about half of the market) and CO2 lasers (about 1/3 market), and the application of semiconductor lasers is also increasing.

Invitation of Exhibition Laser World of Photonics 14-16 September, 2017 from XTLASER

Glad to tell you that we are going to take part in the exhibition Laser World of Photonics on 14-16 Sep. in Pragati Maidan Newdelhi India. We will exhibit our fiber laser cutting machine XTC-F1530 with 500W Raycus laser source, Mini/Stand 20w fiber laser marking machine, Jewelry laser welding machine.

If you are interested in these machines, i will be pleased to send you more information about these models or other models of all our laser machines.

It would be great to receive an answer with your comments.
Thank you!