what is the principle of fibre laser marker. 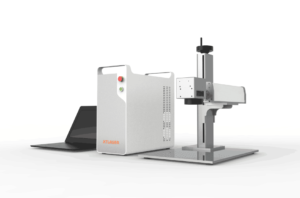 the principle of fiber laser marking machine
firstly,Laser marking is the laser beam mark on the surface of various material ,and the effect is permanent.

Or the Light energy caused chemical or physical reactions of surface materials, which lead to the permanent mark.

Light can burn off some of the material and show the etched pattern and text .

What is the principle of fibre laser marker
A laser beam with a higher energy density ( a concentrated energy flow).

Be illuminating On the surface of the material which be processing .

and then the surface of the material absorbed laser energy,

and a thermal excitation process is generated in the irradiation region.

Thereby the temperature of the surface (or coating) of the material rises, causing metamorphosis, melting, ablation, evaporation, and the like.

Capable of breaking materials (especially organic materials) or the Chemical bond in the surrounding medium,

so that the material undergoes a non-thermal process damage.

because it is not thermal ablation, but cold peeling that interrupts chemical bonds without causing “thermal damage” side effects.

For example, in the electronics industry .

An excimer laser is used to deposit a thin film of chemical material on the substrate material to form a narrow trench on the semiconductor substrate.

Firstly,Lamp-pumped YAG
laser marking machine is a solid-state laser with a wavelength of 1064 nm in the infrared band.

As a medium for generating laser light, the pump source emits incident light of a specific wavelength.

The laser energy need to amplified and shaped to form a usable laser beam.

so that the medium generates a large number of inverted particles to form a giant pulse laser output under the action of the Q switch.

The effect of marking is to expose the deep material by evaporation of the surface material,

or to “engraving” the physical changes of the surface material by light energy.

Or to burn some of the material by light energy to reveal the desired etching pattern. , text, barcode and other graphics.

Fiber lasers can be developed on the basis of fiber amplifiers:

under the action of pump light, it is easily formed in the fiber high power density , resulting in laser working substances.

which is a laser galvanometer marking machine that uses CO2 gas as a working medium.

the discharge tube charging the CO2 and other auxiliary gases and the electrode apply high voltage .

so that the gas emits a laser with a wavelength of 10.64um, and the laser energy is amplified and vibrated.

After the mirror scan and the focusing F-Theta mirror

under the control of the computer and the laser marking control card,the work piece can marking the image, text, numbers and lines according to the user’s requirements.

before the early years,，Q-switched lasers appear to our eys.

so they currently occupy a large processing market. The MOPA laser has only gradually developed in recent years. As a newer technology,

The 355nm UV laser is developing machine uses the third-order intracavity frequency doubling technology to compare with the infrared laser.

What is the principle of fibre laser marker

The 355 UV focusing spot is very small. can greatly reduce the mechanical deformation of materials and has little influence on processing heat.

It is mainly used for ultra-fine marking and engraving.

Application areas such as complex pattern cutting for silicon wafers.

we could see some photos on metal and some materials .

What is the principle of fibre laser marker

Finally,here is the actual samples by fiber laser machine,please take a look.

How to maintenance Laser cutting machine with temperature in summer Vicky