Many customers asked about how to engraving o Metal mold?The fiber laser marking machine is suitable for mold engraving?

What Is Deep Laser Engraving? 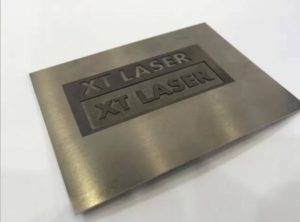 Deep laser engraving is a machining process that removes up to an inch of material. It is frequently to add detail to molds such as patterns and features. It’s different from laser marking,just mark on the surface of the material.

Laser engraving uses higher powered fiber laser systems , typically for laser marking and engraving. The system uses engraving software as well as a range of motion control devices for precise control, and has the ability to engrave flat and contoured surfaces.

A significant benefit of using lasers for engraving molds is that it works equally well on hardened steel surfaces. In this context, it has similar properties , also known as spark eroding. However, it’s generally faster, easier to set up, and requires no expensive consumables such as electrolyte and electrodes.