How to get a better cutting quality

How to get a better cutting quality. 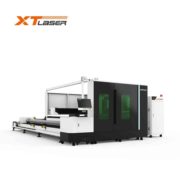 Secondly,Verticality. Whether the edge angle of the slit is vertical and the slope is too large.

Thirdly,Cutting width. The width of the slit generally does not affect the quality of the cut. The cut width has an important effect only when a particularly precise contour is formed inside the part. This is because the width of the cut determines the minimum meridian of the profile. As the thickness of the sheet increases, the width of the cut also Increase.

Fourthly, grain. When the slab is cut at high speed, the molten metal does not appear in the slit below the vertical laser beam, but instead is ejected after the laser beam is deflected. As a result, the curved lines are formed at the cutting edge, and the lines closely follow the moving laser beam. To correct this problem, the feed rate is lowered at the end of the cutting process, and the texture of the lines can be greatly eliminated.

Finally,Depression and corrosion. The depressions and corrosion have an adverse effect on the surface of the cutting edge, affecting the appearance. They appear in cutting errors that should normally be avoided.

Before the purchasing,we need know more about machine,you can contact us.