Laser directly engraving copper plates has always been considered technically infeasible, but laser can directly engrave zinc. Swiss MDC company has achieved laser direct engraving through the improvement of plate making process. A thin layer of nickel is first electroplated on the copper roller, then copper is plated on the surface, and then a layer of zinc is plated. This layer of zinc can absorb laser energy and evaporate, and then the copper underneath evaporates, creating a network that carries ink. After engraving, like other engraving rollers, a layer of hard chromium is finally plated on the roller. A YAG laser with a power of about 500W has also been developed, which can engrave 70,000 cells per second.
The direct laser engraving system is mainly composed of three parts: high-energy laser, laser transmission system, optical system, and adjust the energy per unit area by adjusting the focal length.

The laser can process almost any material, but limited by the power of the laser transmitter, the materials that can be processed by the “Leibao” laser engraving and cutting machine are mainly non-metallic materials, and the “Optilink” laser engraving machine is mainly made of metal materials. Mainly.
Including: plexiglass, plastic, two-color board, glass, bamboo wood, foam plastic, cloth, leather, rubber board, stone, artificial stone PVC board, wood products, metal board, crystal, Corian, paper, alumina, resin , Sprayed metal.

1 Wide range: Carbon dioxide laser can almost engrave and cut any non-metallic materials. And the price is low!
2Safe and reliable: Non-contact processing is adopted, which will not cause mechanical extrusion or mechanical stress to the material. No “knife marks”, no damage to the surface of the workpiece; no material deformation;
3 Accurate and meticulous: the machining accuracy can reach 0.02mm;
4Environmental protection: the diameter of the beam and spot is small, generally less than 0.5mm; the cutting process saves materials and is safe and sanitary;
5 Consistent effect: Ensure that the processing effect of the same batch is completely consistent.
6 High-speed and fast: can immediately carry out high-speed engraving and cutting according to the pattern output by the computer.
7 Low cost: Not limited by the number of processing, laser processing is cheaper for small batch processing services. 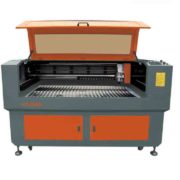